I did a double-take last Sunday when I was working in the bee yards; bees were returning to the hive with huge amounts of pale yellow pollen packed onto their hind legs.  Turning my eyes skyward I searched for exploding buds, since I figured this early blooming must be a tree, but I didn't identify anything. 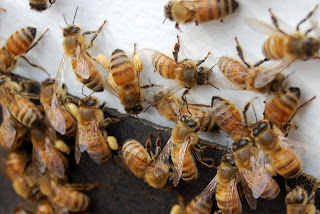 These bees are packing pollen in their corbiculae, a divot on their
back legs also familiarly called a pollen basket
(Zimmerpeople Hive)


Later that evening I looked up Jim Kloek's excellent website http://naturesnectar.blogspot.com/ to see if he was seeing pollen in his hives.  He had posted the following:

A couple beekeepers told me they saw their bees bringing in pollen. There isn't pollen quite yet. The bees are going to bird feeders or deer feeders and picking up dust off of the feed. They will get this seed or corn dust and bring it back to the hive as pollen. Bees will also collect fine sawdust in the very early spring. I knew a beekeeper that someone was building a treated lumber deck across the street from his hive. The bees went over and brought back the treated lumber sawdust. The treated lumber had an insecticide in it. The colony died as the result of this. Pollen may start coming in as the frost leaves the ground.  If there are pussy willows in your area watch them for bees working for available pollen.

I like and respect Jim, especially as a beekeeper, but this post made it seem as if he were living in a different reality than I was.  The first four inches of the soil in my bee yards is defrosted and the possibility that eight hives out of ten were finding that much saw dust or bird seed to pack on, let alone the likelihood that they would, seemed doubtful to me. 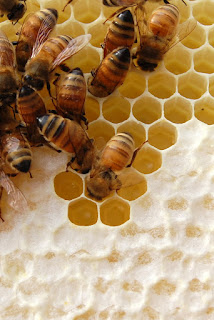 
In fact, the bird seed/saw dust story sounds apocryphal to me.  What would attract a bee to a bird feeder or a construction site?  More to come on this as research time allows.  ;)


Just because the bees are finding pollen doesn't mean that they're finding much nectar, though.  Not knowing what kind of pollen the bees are bringing back means I can't tell how much nectar that tree produces in its blossoms.


This morning the Saint Paul Pioneer Press ran an article on the early spring and included a segment on the bee hive at Woodlake Nature Center in Richfield.

A closer look revealed that some of the bees had what are called pollen baskets on their legs."I've never seen them collect pollen this early," Ramsay said. "Tree pollen usually is not out until the first week The of April."

Honey bees were out collecting tree pollen earlier than usual at Wood Lake Nature Center in Richfield. The yellow balls seen on this bee's hind leg is pollen packed into a depression on the leg called the corbicula.

The bees were gathering the pollen from the center's silver maples, several of which sported swollen buds. Some elderberry shrubs at the nature center had also begun to bud, and a few plants were poking their tops out of the thawing ground.

By the solar measure, the first day of spring this year is March 20. But in phenology - the examination of plant and animal cycles and how they relate to climate - a number of signs in nature can mark the beginning of spring. One of the first in Minnesota is the return of the male red-winged blackbird, which winters in the South.  They arrived at Wood Lake on Saturday, 10 March, a full ten-days early.