After waiting for a call from Doug at Cannon Bee regarding the delivery of the Buckfast Italian Queens, I called him on Tuesday and guess what?  The Queens have been there for nearly a week...since the bee packages arrived.  Since I didn't order any packages, he didn't call me in spite of my having been there to pick up Queen separators the week before.


I went over tonight and picked up the Queens.  I was supposed to get eight, but two had died so I only got six.  The entire situation is making me nervous because if two perished in the hours between my call and my picking them up, how long do I have to get these Queens installed and will they flourish?


The stress these creatures are under is inestimable, sitting in a tiny plastic cage next to other Queens (they like to be one to a hive, remember) tended by a small cluster of workers.  The sooner I can hive them, the better. 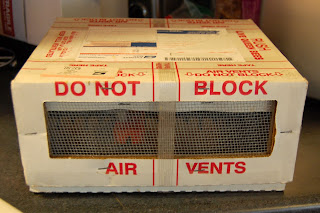 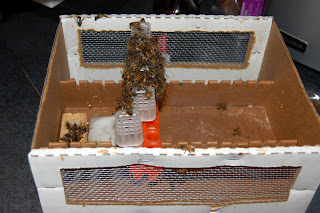 Inside the box are stands holding the Queen cages.  To the left bees are feeding on sugar and the white is a damp paper towel from which they drink 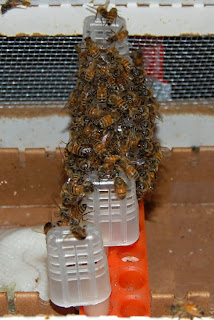 
Meanwhile I am working on responding to emails from folks inquiring about the Hive Host program.  I have had a HUGE response from a posting new Hive Host Theresa R. put on the Master Gardener listserv and that has been wonderful.  Not only did we gain another chicken yard with Theresa, but a great ally in our struggle to keep the honey bee in action.  She also has an amazing yard of wonderful plantings.  Photos to come!
at 4/25/2012 09:34:00 PM