Since I got lucky this year and my hives didn't all die over the winter, I get to do hive divisions this year!  Since I've never done them before I decided to start at home in case I made a real disaster of the procedure.


Hive division is the beekeeper's method of controlling colony growth and preventing swarming, which happens when a hive becomes too small for the number of bees. Throughout the year, but especially in the spring, a beekeeper looks for signs of the hive getting too crowded.


In nature, when the colony becomes too big for the cavity in which it lives, the colony will communicate that swarming -more commonly called supersedure in beekeeping- is imminent and several queen cells will be made and the eggs laid in them will be tended as "queen cells".  This is done in order to raise a new queen for the colony that stays behind.


Though the eggs in the queen cells is the same as every other egg in the brood nest, these larvae will be fed differently than the others.  The difference in the quantity and quality of the food fed to the larvae is what determines the caste of the bee, as the increased frequency and greater nutrition leads to hormone system functionality in queen larvae that does not develop in the larvae of worker bees.


Specifically, the food provided to the queen cells -often called "royal jelly"- contains a much higher rate of mandibular gland secretions of the attendant nurse bees than do worker larvae, it also contains more sugars.  Additionally, the queen larvae are fed much more frequently than the workers.  According to the wonderful book 'Biology of the Honey Bee' by Mark L. Winston (currently the definitive book on honey bee biology), "...queens literally swim in a sea of brood food."

Queen larvae surrounded by royal jelly in their cells
(Wikipedia)


This quantitative and qualitative difference in nutrition stimulates the stretch receptors of the mid-gut of the larva, which leads to an increased release of "juvenile hormone" by the larva's corpora allata, a large organ located in the esophagus.  The juvenile hormone in turn influences the production of other hormones active in the development of the bees cardio system, the brain and the nervous system.  All of this happens quite quickly, as the caste of a larva is decided by the fourth day of development.


Back to the topic of divisions...


Once a queen has laid eggs in queen cells and the colony knows that supersedure is underway, the queen will leave the hive and take the older half of the worker bees with her.  The colony will leave behind enough food and enough nurse bees to continue tending the brood in the hive.  As these nurse bees age, they will become foragers for the colony left behind. 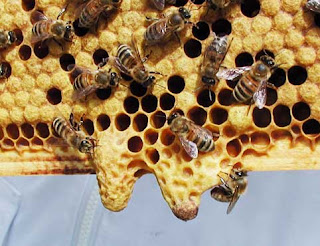 The first of the queens to hatch will then kill the other queens in their cells, makes her "virgin flight" and then begin laying eggs for the colony.


Meanwhile, the swarm of bees -the departing queen and workers that have left the hive with her- will cluster on a tree branch.  While they are huddled, scout bees are going out to look for a new cavity in which to establish their nest. 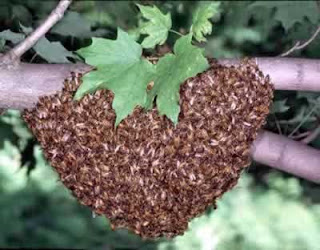 A swarm of bees is very vulnerable and since the bees have neither a nest nor brood to defend, they are very docile.  Once a scout has found a good spot for the new nest, the swarm will move  to that location and begin to build honey and brood comb and the queen will begin laying eggs. A new hive established.